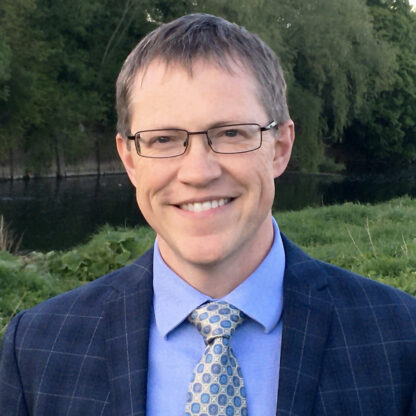 Andy joined Ridley Hall to teach New Testament in the Cambridge Theological Federation and for the Ridley Lay Ministry programme in 2021.

Originally from the U.S. and ordained in the Baptist tradition, Andy has served for thirteen years in various forms of pastoral ministry. Before moving to Cambridge, he lived for ten years in Durham where he completed his PhD, served as Chaplain for St Mary’s College, and taught New Testament, Greek, and ministry leadership at Cranmer Hall where he also launched and directed a ministry training pathway for free churches in the North East.

Daunted yet inspired by a God of biblical proportions, Andy enjoys integrating ministerial training and cultural reflection in his classroom teaching of the New Testament (and yes, even in Greek class!).

Andy’s PhD (2015) is from Durham University and explores the themes of ecclesiology, participation, and theosis in John’s Gospel. He also holds a ThM from Duke Divinity School (2007), an MDiv from Beeson Divinity School at Samford University (2001), and a BSc (in Forestry!) from the University of Georgia (1996).

Andy aspires to write within the rigorous discipline of biblical studies while considering how early Christian writings address church and culture in their day and in our own. Though his primary focus is on the Johannine Literature, he is currently working on “The Church of the Gospels,” a book project with Baker Academic exploring the “narrative ecclesiology” of the canonical evangelists.

He is also interested in the hermeneutical frames that shape our understandings of texts and culture, and in how these two interrelate. Since his academic work arises from a call to vocational ministry, Andy also enjoys thinking about the Bible as a source for pastoral leadership and ministerial formation.

Having grown up around two family farms, Andy enjoys the outdoors and delights in the significance of place and its local lore. If he could be anywhere at any given point, though, he would probably choose to be on a trail in either the Lake District (preferably in the summer warmth) or in the Appalachian Mountains (preferably not in the summer heat).

Though often with a theology or biblical studies book in hand, he loves reading fiction and even trying his hand at writing it. His wife and four kids are his favorite adventure companions… and the family dog Hagrid is usually along for the journeys.

Articles for a Wider Readership

Return to full list of Who's Who
Next: Becca Dean
Send feedback on this page