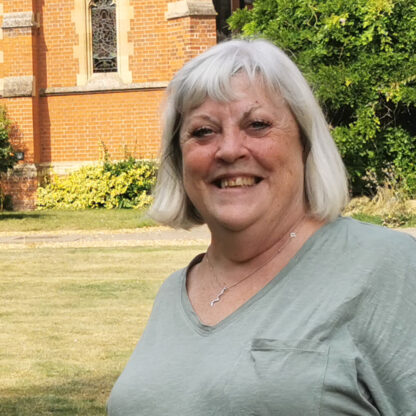 June joined the Ridley Hall team in 2021 as the Specific Learning Differences Tutor, supporting and advising current and prospective students and staff on disability-related matters and ensuring that all students are receiving appropriate support.

She feels that it is a privilege to be able to work alongside students, in their academic, working and personal lives, to facilitate the development of the strategies that they need to accommodate any challenges that arise from their SpLDs.

She is very much enjoying developing her role at Ridley Hall and being part of the team.

Since starting her career as a specialist teacher and assessor, June has worked, predominantly, in the post-16 sector, teaching, assessing and supporting students in Further Education, Higher Education and in Years 11 to 13. June has also had the pleasure of assessing and delivering workplace strategy training to people in the workplace.

Her career began at Cambridge Regional College, where she coordinated support and taught study skills. Since becoming self-employed 15 years ago, June has worked in a variety of settings, teaching, assessing, advising and writing and delivering workshops on the impact of SpLDs on learning and employment. She is the author of Meeting the Needs of Students with Dyslexia and has written articles for journals and websites on SpLDs and the impact of epilepsy on learning.

June has worked for the University of Cambridge since 2009, including a part-time role as Disability Adviser between 2012 and 2014. She still teaches study skills to the University’s students who have a range of disabilities and delivers workshops for the Disability Resource Centre team.

Before moving to Ely in 2008, June led Junior Church at St. Michael’s In Bishop’s Stortford for 22 years. She is now very much ‘part of the fabric’ of Ely Cathedral, becoming the ALM for Children’s Worship in 2012, and is currently working with the Learning Department and clergy to build further opportunities for worship for families.

June has been a trustee of the charity Epilepsy Action for 22 years, holding the post of Chair, Vice-Chair and, currently, Honorary Treasurer of the Association. She is a member of Mensa, but rarely has the time to go to events!

Since 2014 June has been making fused glass, which she now sells in outlets, at craft fairs and on a commission basis. She loves running workshops as she has to encourage people to ‘think outside of the box’ when working with an unfamiliar material. Thinking creatively has been the leitmotif of her career!

June recently moved to Sutton, near Ely and will be busy building a new garden next year. She loves being in the company of her two children and four grandchildren, of whom she is extremely proud.

Back to people list
Next: Rob McDonald
Send feedback on this page