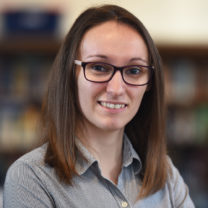 Kayleigh oversees the wellbeing of the RLM student body, taking a holistic approach to their care. This can include personal matters, placement issues, academic concerns and general worries or stresses.

One of Kayleigh’s key roles is to teach pastoral care and to coordinate the teaching of reflective practice modules that are at the core of the RLM student experience and learning.

Between the ages of 11 and 17, Kayleigh was a keen sportswoman and played for her local teams in football and hockey to county level, while also working towards her black belt in karate. Her original plan was to follow a career in education, with a specific focus on PE teaching. Unfortunately, during a football game, Kayleigh sustained a severe knee injury that impacted significantly and she wasn’t allowed to play again.

During a gap year, Kayleigh started taking more of a lead in youth work both in schools and church. This experience convinced Kayleigh to study for a BA (hons) in Schools, Community and Youthwork with Practical Theology at Ridley. Her primary focus was on young people with behavioural and/or mental health issues. Following the completion of her degree, Kayleigh went to work with young people on the autistic spectrum.

Currently studying for a Masters in Psychology, Kayleigh believes that drawing on our God-given understanding of the mind and the inner workings of a person is integral to understanding ourselves and others, so to be better equipped as the ministers we are called to be.

Kayleigh has an eclectic taste in music and plays a number of instruments: acoustic guitar, percussion, bass, ukulele and vocals. Kayleigh is also a keen photographer and enjoys being outside in the sun, long walks and city breaks away.

Return to full list of Who's Who
Next: Rachel Rosborough
Send feedback on this page