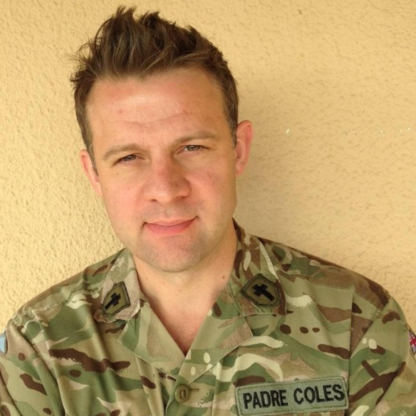 Matt has been a chaplain in the Army since 2012. Chaplains, or padres, are privileged to offer pastoral care, moral guidance and spiritual support to serving personnel and their families in the UK, across the Overseas Bases and on operational deployments. This sector is a secular, albeit a historic, Christian context, and it faces, therefore, many institutional challenges in advance of civilian church counterparts. As such, it is an interesting vanguard for faith issues and opportunities for gospel-centred ministry.

In the last ten years, Matt has served six major units in four locations, including 32 months’ accompanied post in Cyprus and a tour in Afghanistan. He has also completed the Intermediate Command and Staff Course, a Masters’ Degree in Chaplaincy Studies and is now in the fifth year of an Army-funded, part-time PhD examining counter-terrorism.

Matt trained at Ridley Hall between 2006 and 2009 and served his curacy in Chesham. He is married to Vicky, who is a teacher, and they have two primary school-aged children. They presently live in the vicinity of Andover, where Matt works in Army HQ to help direct and assure chaplaincy activity across the Army. Matt continues to seek, however, any opportunity to conduct his first love – to directly minister to a predominantly male cohort and associated masculine culture, of the love and relevance of Jesus Christ.