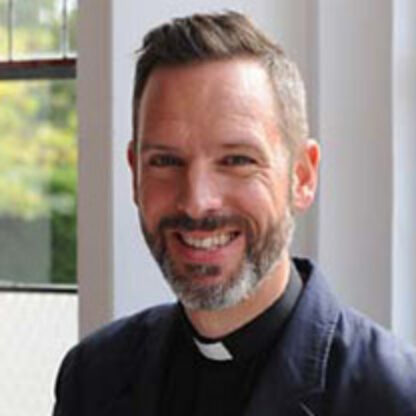 Michael Volland reflects on his role as Principal of Ridley Hall

I have twin passions for theological education and training at Ridley Hall.

The first is captured perfectly in the words of Handley Moule, Ridley's first Principal, who wrote, ‘To be like Christ… We aim at nothing less than to walk with God all day long, to abide every hour in Christ and He and His words in us, to love God with all the heart and our neighbour as ourselves'.

I share Moule’s desire for myself, my family, my colleagues and every student who trains at Ridley. In other words, my first passion for theological education is that it aims primarily to encourage and enable growth of Christ-like character in those who teach and in those who learn.

My second passion for theological education and training at Ridley is that it encourages and enables entrepreneurship; a set of qualities and characteristics that I believe are a gift of God to His Church and particularly appropriate in an age of rapid change.

"To be like Christ… We aim at nothing less than to walk with God all day long, to abide every hour in Christ and He and His words in us, to love God with all the heart and our neighbour as ourselves." Handley Moule, First Principal of Ridley

What we notice in entrepreneurial individuals, teams and institutions are things such as trust, partnership, collaboration, opportunity-spotting, vision, energy, focus, creativity and innovation – all of which are in great demand in the current mission situation.

When these qualities are nurtured in an environment such as Ridley Hall, in which the key priority is growth in Christ-like character, the result is the formation of Kingdom-entrepreneurs; people filled with the Spirit, passionately committed to collaborative, creative Gospel service in the world.

These twin passions are an excellent fit with Ridley’s founding vision, which was that the Good News of Jesus be proclaimed to the ends of the earth so that individual lives, communities and cultures may be transformed by God’s redeeming grace.

Although, under the guidance of the Holy Spirit, the vision at Ridley continues to evolve, the focus on training people to proclaim Jesus Christ remains at the heart of all we seek to do. I warmly invite you to join us so that you might experience and be blessed by all that God is doing here.

Michael has been the Principal of Ridley Hall since January 2017. He is currently Chair of the TEI Principal's Steering Group and a member of the Ministry Council of the Church of England. Between 2020-2022 he served as President of the Cambridge Theological Federation. Before becoming Principal Michael served on the Ridley staff team as Tutor in Pioneering and Context-Based Training.

Before coming to Cambridge in 2015, Michael was Director of Mission at Cranmer Hall, Missioner to the East Durham Mission Project; a group of nine parishes in the east of the Diocese of Durham, and Acting Area Dean of Easington.

Prior to his ministry in Durham, Michael spent three years on the staff of Gloucester Cathedral, during which time he pioneered and led a fresh expression of church in the city centre. Before ordination training he spent six years engaged in parish-based youth ministry.

Michael has led a number of mission teams to Newquay in Cornwall and also spent a number of years on the worship planning team for Greenbelt Festival. He has previously held a commission in the Royal Army Chaplains Department (RAChD) and served as chaplain to Durham Army Cadet Force.

Michael is married and he and his wife have three children. He has been a member of Christian Surfers UK for over twenty-five years. He enjoys running and regularly competes in road marathons and ultra-distance trail races around the United Kingdom.

Michael undertook his doctoral research at the Department of Theology and Religion at Durham University. His thesis was titled: ‘An Entrepreneurial Approach to Priestly Ministry in the Parish: Insights from a Research Study in the Diocese of Durham’. He maintains an ongoing research interest in the area of missional entrepreneurship and a version of his thesis was published by SPCK in 2015.

He holds a Durham University Learning and Teaching Award and is an Associate Fellow of the Higher Education Association (AFHEA). He trained for ordained ministry at Ridley Hall, Cambridge. He has an MA in Youth Ministry and Theological Education from Kings College London. His first degree was in Fine Art.

Michael has published a number of books, chapters and articles, including:

Return to full list of Who's Who
Next: Fiona Green
Send feedback on this page