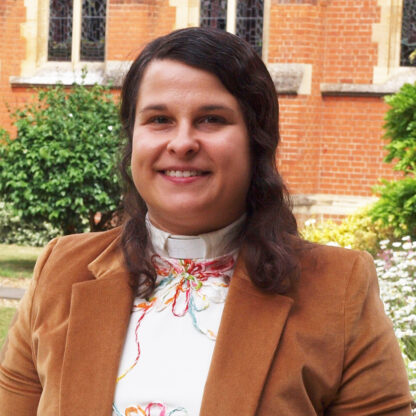 As Tutor in Old Testament, Olga teaches a wide range of modules in biblical studies, Old Testament, and Biblical Hebrew at both undergraduate and postgraduate levels. From 2023, she will also take on the role of overseeing admissions at Ridley Hall as Tutor for Admissions.

Olga is passionate about cultivating and renewing the scriptural imagination of the Church at this time of challenge and opportunity, especially by fostering the intellectual formation of those training for leadership, whether lay or ordained. Olga wants Ridley students to have a transformative encounter with the Bible, to delight in the scriptural riches, to become adept and agile interpreters of the Old Testament, and to come to see the world through the lens we find in Scripture. As a priest and as a scholar, Olga aspires to inform the pastoral vocation by cutting-edge scholarship and rigorous study and set the scholarly vocation in serious conversation with the demands of parish life.

In her research and teaching, Olga seeks to combine historical rigour and theological depth, recognising and respecting the historical situatedness of the Old Testament as a product of the social, intellectual, and exegetical world of ancient Israel and its enduring significance as Jewish and Christian Scripture.

Born and bred in the bustling city of Moscow, Olga came to faith at university, while she was studying Computer Science and preparing to embark on a career in IT. Her carefully constructed plans went out of the window when Olga felt her heart “strangely warmed”. Eventually, she moved to Cambridge to train for Anglican ordination as an ordinand from the Diocese in Europe and spent six formative years at Ridley Hall.

It was during her time at Ridley that she discovered a passion for the Old Testament. After completing her Tripos and MPhil at Corpus Christi College, Olga went on to pursue a PhD in Old Testament studies as a Gates Cambridge Scholar at Trinity College. Unable to stay away from Ridley for long, she returned to teach Old Testament in 2021, first as a part-time Teaching Associate and then as a full-time Tutor.

Her husband, Simeon, has a PhD in Early Christianity and works in Research Strategy at the University of Cambridge. With a boisterous young son, Olga and Simeon do not have much time to spare, but God is good. To stay sane, Olga goes swimming, listens to classical music, and escapes on long walks.

Prior to Olga’s appointment at Ridley, she served as Chaplain at Trinity College, Cambridge. She is also a part-time Assistant Curate at St Bene’t’s, a vibrant parish in the heart of Cambridge. As a former University Chaplain, Olga continues to take an interest in ministry to students and young adults, as well as in sensitive and well-informed religious leadership in secular environments as well as in cosmopolitan and multicultural settings.

Olga is an Affiliated Lecturer and a member of the Old Testament Subject Committee in the Faculty of Divinity of the University of Cambridge. In addition, she serves on the Ministry Team of the Diocese in Europe as a Special Educational Adviser for Theological Training.

Olga is also a member of the Society for Old Testament Study (SOTS), the Society of Biblical Literature, the Young Priest Theologians Network, as well as New Wine.

Olga has a particular interest and expertise in prophecy, prophetic literature, and the rich ancient literary culture behind the production of these texts. Her research has also revolved around exegesis and hermeneutics, both ancient and modern, as well as historical theology of the Old Testament.

As a scholar of ancient exegesis, Olga seeks to contribute to the understanding of ancient encounters with Scripture through her research. Addressing the issues of historicity, divine revelation, and human interpretation, her doctoral project, currently in preparation for publication, reconsidered the abiding spectre of false prophecy in the book of Jeremiah as a product of ancient exegetical imagination. Olga’s current project centres on prophetic biographies in the Hebrew Bible.

But driving Olga’s research and teaching has always been more than an academic desire to understand ancient interpretation on its own terms and for its own sake. Thus, Olga is interested in retrieving and deploying the hidden riches of ancient biblical interpretation for the benefit of the modern Church. By attending to wise and surprising voices from the past, not only do students learn to interpret the Bible in ways that differ from their own exegetical competencies and cultural intuitions. They also discover fresh ways of exegeting, sympathetically yet critically, wider cultural practices that surround Christians today. Equipped with robust interpretative tools, ancient and modern, students can have the confidence to tackle any challenge that the Old Testament may throw at them—and to do so with delight, passion, and rigour.

Return to full list of Who's Who
Next: Rob French
Send feedback on this page