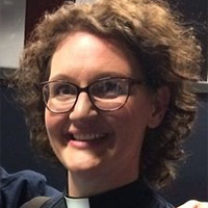 Rachel is a part-time pastoral tutor at Ridley. As pastoral tutor she is responsible for a small group of ordinands during their time here at Ridley, encouraging them, meeting with them both individually and as a group for support, prayer and fellowship.

Rachel combines her role at Ridley with being Priest-in-Charge of St Andrew & St Mary’s, Grantchester and St Mark’s, Newnham, having moved to Cambridge in 2017 to take up the post. She lives in Grantchester but shares her time between the two parishes.

She is also on Diocesan Synod in the Diocese of Ely.

Rachel grew up in the West Midlands and attended a United Reformed Church with her mother and siblings. When she was in her early teens the family stopped going to church but, at the age of 16, came to faith in the local parish church youth group. She threw herself into church, getting involved in a number of ways, including preaching for the first time about three months after coming to faith!

It was after this that Rachel first felt a call to ordained ministry. After a brief but encouraging conversation with the then curate, she completed her A-levels and went to do a year out as a parish assistant in a village church in Cambridgeshire. The year out developed somewhat and seven and a half years later, with a husband, 2 young children and a degree, she moved to Surrey!

A few years later, at the age of 28 and after having a number of different jobs in churches and the charity sector, in Customer Services and as a beer and spirits taster for an independent brewing company, Rachel finally did something about the niggling sense of vocation to ordained ministry.

In 2006, Rachel and her family moved to St John’s Nottingham for her to begin training for ministry. She was ordained in Gloucester Cathedral and served a curacy in Cheltenham, before moving to be Rector of five Cotswold churches.

Rachel’s husband Sam, who is originally from Northern Ireland, is a retired Civil Engineer and their – now almost grown up – children are Joe and Phoebe.

Rachel has a BA in Social Policy and completed her MTh during her first incumbency, with a dissertation on the three-way partnership between Gloucester Diocese, the Diocese of El Camino Real, California and the Diocese of Western Tanganyika, Tanzania. The dissertation focussed on how to stay together and united amidst difference and diversity, and this remains a key interest for Rachel.

Other interests and passions include formation for and in ministry, vocations – especially ongoing vocational discernment after ordination – good preaching and faith and culture.

Return to full list of Who's Who
Next: Suzi Stock
Send feedback on this page