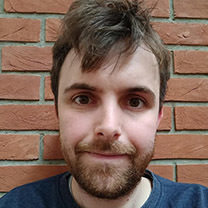 Rob Barward-Symmons is an Associate Tutor and the Ministry Support Officer at Ridley London. Based in Enfield, he was instrumental in helping to develop the Ridley London resources and curriculum, and is now involved in the planning and delivery of teaching to the students at the London campus.

Building on his experience in youth ministry as well as his academic background in theology and the sociology of religion, Rob is excited to encourage a new generation of youth workers in the wide range of areas in which Ridley Hall specialises.

Rob is also the contact point for any questions or concerns students based at the London teaching centre may have.

Rob is currently studying for his PhD in the Sociology of Religion at the University of Kent, exploring the development of adolescent Christian faith in an evangelical youth group in London.

This is an ethnographic project, and will likely be completed in the Summer of 2020.

He also has undergraduate and Master's level degrees in Theology, both from Durham University.