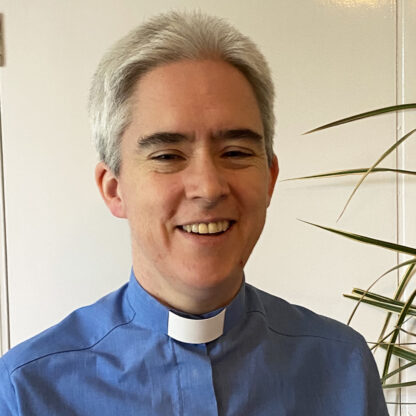 Ruth grew up in Belfast during the Troubles and was strongly influenced by the work of the Corrymeela Community in conflict transformation. This kindled and encouraged a fascination in how we deal with difference creatively. She has also been greatly influenced and inspired by the work and witness Br Roger and Taize community.

Ruth studied history at the University of Durham before going to the Church of Ireland Theological College in Dublin and being ordained deacon in 1997 and priest in 1998 in the Church of Ireland. She was serving as a curate in Omagh at the time of the bombing in 1998 and shared in the ecumenical response to the tragedy. Ruth was a chaplain at Trinity College, Cambridge in 2000-2006, working with both students and the college staff and doing a bit of rowing and coaching on the side. During this time she started studying in the Centre for Jewish-Christian relations (now the Woolf Institute) and achieved a postgraduate diploma. She served for five years as Minister of Bar Hill LEP which united Anglican, Baptist, Methodist, Quaker and United Reformed Church traditions in a single fellowship. Following this she spent a year in full-time study to take a masters degree in Peace and Reconciliation Studies at the University of Coventry. Her dissertation explored the possibilities for conflict transformation in complex church conflicts. Since 2012 Ruth has been dividing her time between serving as vicar of St George’s Church Chesterton in Cambridge and working in the area of conflict resilience.

Over the years Ruth has served as a governor in three primary schools: one a Church of England school and two community schools. She has also served as a charity trustee for Cogwheel – a small Christian mental health charity and currently serves as a trustee for The Church Schools of Cambridge – whose vision is to grow Christian environments where children can learn and flourish.

Ruth has had a long interest in vocation, particularly working in the area of Christian ministry as a vocations adviser and then Bishop’s Adviser for the Diocese of Ely, sitting on national BAP panels. She has conducted ministry reviews both for the Diocese of Ely and in more recent years for the Eastern Synod of the URC. She has long enjoyed working with ordinands on placement in her various contexts and has been and is currently, a training incumbent.

Ruth's conflict work involves providing coaching and training to church leaders and communities in how to respond to conflict and working as a mediator in disputes in churches and charities. She currently serves as the Bishop’s Adviser for Resilience in Conflict in the Diocese of Ely.

Return to full list of Who's Who
Next: Lucy Anstey
Send feedback on this page