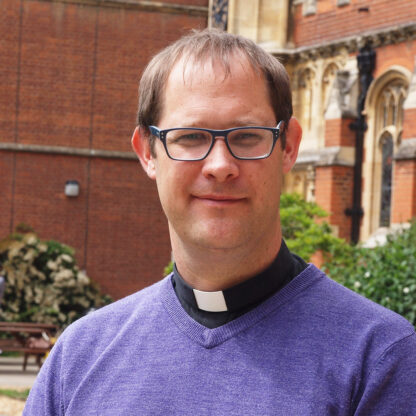 Michael grew up in Cambridge (just off Mill Road). After 4 years of working in IT as a self-taught programmer, he felt the lure of finding out more about his faith and went to Durham to read Theology for 3 very happy years. After returning to Cambridge to complete an MPhil in New Testament studies, he trained as a teacher of RE and ended up as Head of Department at Comberton Village College just outside the city.

In 2015 he started formation for ministry at Ridley Hall and enjoyed the Common Award MA programme (and also a year as Common Room Treasurer). He was ordained in 2017 to serve in the parish of East Leightonstone in Ely Diocese and then in 2020 became Rector of Girton and Vicar of Madingley, which are just to the north of Cambridge.

Education remains an interest and so Michael sits on the Diocesan Board of Education, as well as being a governor at a local primary school. He is committed to growing a confident people of God, both lay and ordained, and as an incumbent he's enjoying the opportunity to work with ordinands.

He also serves as a link Trustee with Ridley's sister college in Oxford, Wycliffe Hall.

Michael is married to Kathryn and they have three young boys.

Next: The Revd Becky Dyball
Send feedback on this page