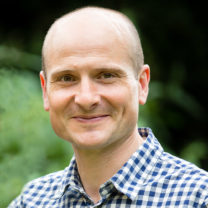 James took up his current post in 2013 as Team Rector of the Chipping Norton Benefice in Cotswolds, twenty miles from Oxford, overseeing nine churches, but with his particular focus on the town church in Chipping Norton itself.

Leading up to his present appointment, James trained at Wycliffe Hall in Oxford and then served a three-year curacy at St Andrew’s, High Wycombe. Prior to ordination, James studied Medicine at Magdalene College, Cambridge and St Mary’s Hospital in London before undertaking his surgical training and doctoral research at Oxford. He was appointed to Oxford University’s first ‘Surgeon Scientist’ post, where he also worked as a Clinical Lecturer until sensing God’s call to lead full-time in a church context.

James is married to Emma and they have four children. As well as enjoying rugby (watching now rather than playing!), he loves being outside walking in the Lake District and Yorkshire Dales.