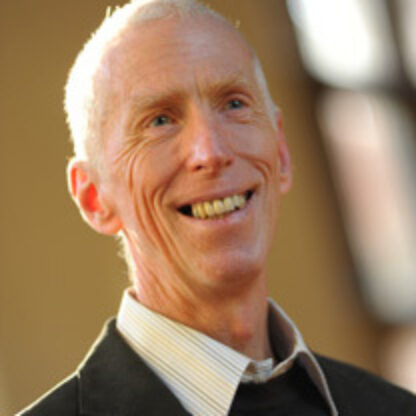 Adrian came to Ridley Hall in 2007 to establish and develop the Simeon Centre for Prayer and the Spiritual Life. In that role, he acted as a spiritual director and mentor, a member of the national Fresh Expressions team, a pioneer trainer and a speaker on prayer and discipleship. His academic role included teaching on Anglicanism, Christianity and the arts, Biblical Theology, and Spirituality, and his research interests include aspects of Pentecostal and Anglican history, thought and practice.

Now resident in Ilkeston, Derbyshire, he continues his association with Ridley Hall as its first Fellow. In this role, he is supervising Professional Doctorate and MA research, offering spiritual direction and sharing in the life of the Simeon Community.

"The thing I treasure most at Ridley is its life-giving community, to which we all commit as family, and in which we invest as co-workers for Christ. Living, working, praying and playing in community shapes us and toughens us up as disciples for the mission of God."
Adrian Chatfield

Adrian was born in Trinidad, and brought up there and in Brazil. After training for ministry at the College of the Resurrection in Mirfield, he worked in parish ministry for 15 years in Trinidad and North Devon.

For over 20 years, he has been a theological educator at St John's College Nottingham, TEE College Johannesburg and Wycliffe Hall Oxford, while continuing in non-stipendiary parish ministry.

When not studying and working, Adrian enjoys long-distance running and cycling, walking and photography with his wife Jill, and listening to classical and world music. He and Jill have two children and four granddaughters.

Adrian continues to be actively involved in ministry in the Dioceses of Derby and Southwell & Nottingham, living as he does on their shared border. Further afield, Adrian is External Examiner for Moorlands College in Dorset, and for Theological Education by Extension College in Johannesburg. He advises widely on programmes of spirituality and spiritual direction, and regularly conducts retreats and parish weekends.

Adrian's latest book on Soul Friendship: A Practical Theology of Spiritual Direction, co-authored with The Revd Dr Nigel Rooms (a former student of Adrian's), was published by Canterbury Press in September 2019. In 2018, he wrote a chapter on the Theology of Christian Marriage for 7 Reasons Your Church Needs More Men: How to lead a gender balanced church supporting healthy singleness, dating, marriage and youth (November 2018: The Engage Network).

Adrian has written many distance learning programmes, and authored Something in Common, an introduction to Anglicanism, available in Spanish, Portuguese and Swahili.

He acted as Consultant to the Editor of The Anglican Communion and Homosexuality, produced as a resource for the 2008 Lambeth Conference. In 2011, he contributed chapters on Worship and Spirituality for the BRF publication Pioneers 4 Life, and completed a distance learning History of Christianity from the 17th to the 19th centuries in 2013. 2017 saw the publication of Missional Communities and the Sacraments of the Church, in which he has a chapter on ‘The Healing Sacraments’.

Adrian is currently supervising two professional doctorates: one on a Christian residential community serving women victimized by trafficking, prostitution, addiction, and abuse, and the other on psychotherapy and Zen Buddhism. He would be pleased to consider requests for supervision in the academic disciplines of Spirituality, Christianity and Literature and African or Afro-Caribbean Christianity.