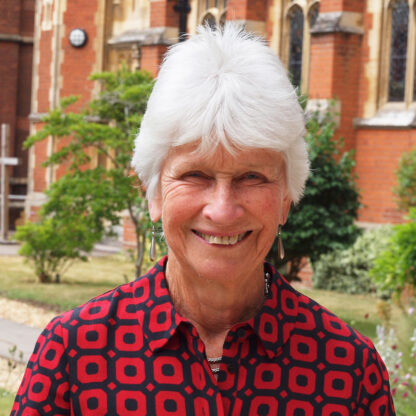 After graduating from Newnham College, Cambridge, Sibella joined the British Council, with whom she worked for ten years before deciding to retrain as an ESOL teacher and teacher trainer, which stood her in good stead as she moved around the world (mostly the Middle East, since they both speak Arabic) with a husband in the Diplomatic Service.

They lived in a variety of Arab countries, including seven years in Saudi Arabia, and have an abiding interest in the Arab world – its history, social customs, politics and language – and in interfaith dialogue. She is actively involved with the Diocese of Cyprus and the Gulf as a Trustee of its Foundation, and also with the Diocese of Egypt.

From 2008 until 2018 the Laings lived in Corpus Christi College where Stuart was Master. During this time she became familiar with Ridley Hall, through her work with Corpus Christi Chapel. Their family, all of whom went to Cambridge University, are committed Christians; their son is Diocesan Secretary, Llandaff, and one of their daughters is the Anglican Chaplain in Leuven, Belgium. Sibella's other interests include drama, poetry, running, wild swimming, and desert exploration. They now live in Wiltshire, where Sibella is a Licensed Lay Minister in the Diocese of Salisbury.