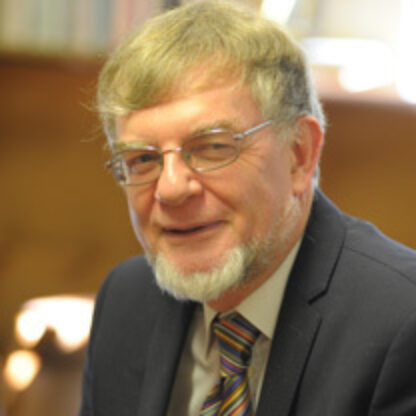 Formerly Director of Studies and Tutor in Ethics at Ridley, Richard retired in 2018 as the longest-serving member of staff, having joined the College in 1989. He remains active in the areas of speaking, writing, editing and supervision.

"Ridley is quite simply a great place to be – otherwise I wouldn’t have stayed so long! Not only is it a special physical location, but it attracts some wonderful people, staff and students, who make up its mutually supportive community. It engages with contemporary culture in diverse, stimulating and mission-focused ways." Richard Higginson

Richard grew up in a Christian home but made a definite commitment to Christ around the time he came up to Cambridge University to read History and Theology at St John’s College. A highlight of his undergraduate years was helping organise the memorable 1974 CICCU mission.

For three years he taught at Handsworth Grammar School in Birmingham where he became an Aston Villa supporter, a habit which has sometimes felt like a poisoned chalice. He then did a PhD at Manchester University, where he met and married Felicity, before landing his first lecturing job at Cranmer Hall in Durham (1981–89). Along the way they have parented five children, three of whom are now married and running their own businesses.