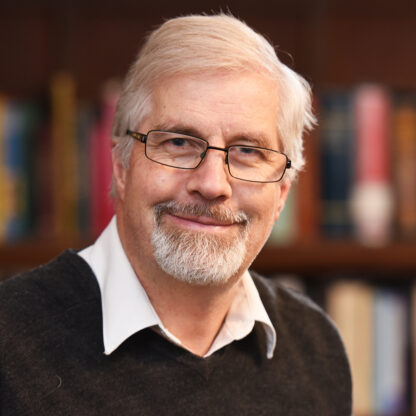 Philip taught Old Testament at Ridley for 15 years before retiring in 2021, and continues his relationship with the college today as a Ridley Associate. He is secretary of the Grove Biblical Series and has written several booklets that are designed to help people grapple with difficult texts.

“What I most value about Ridley is the way in which studying, worshipping and living together helps us grow into the fullness of Christ, especially as we learn more about our strengths and weaknesses, our dreams and our fears.” Philip Jenson

Philip came to faith around the time he went to University. He eventually realized that studying Chemistry was not his key passion, so after a brief stint as a computer programmer, he came to Ridley as an ordinand. He has always found himself asking the hard questions, so finding the Tripos didn’t answer them all, he took a year out in New York to study that part of the Bible that raises the hardest questions, the Old Testament. This led not only to meeting his future wife, but also a decision that the notoriously challenging priestly writings in Exodus, Leviticus and Numbers deserved a little further study in the form of a doctorate. Finally finishing Ridley seven years after he began (a record?) he became a curate. He was then appointed to teach Old Testament at Trinity College, Bristol. Sixteen years later he returned to Ridley as Old Testament lecturer.

Philip is married to Ruth. They have three musical daughters. He enjoys playing tennis and occasionally finds an opportunity to play his bassoon.

For his PhD Philip tackled the priestly writings in Exodus, Leviticus and Numbers, and remains fascinated by the different way in which these complex texts are interpreted and can inform worship today. He is also interested in how to think theologically about the whole Bible through Old Testament and Biblical Theology, hermeneutics, and metaphor.

He is a member of:

Return to full list of Who's Who
Next: Mike Kelly
Send feedback on this page