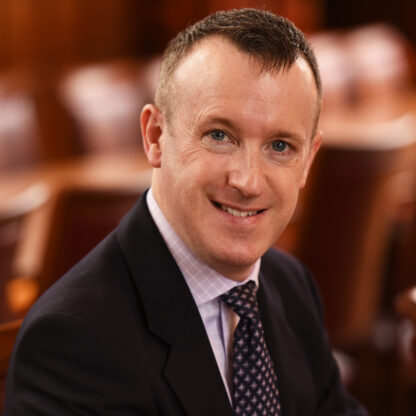 As Academic Dean, Rob oversees the theological education provided by Ridley Hall, ensuring that it offers a rich, rewarding and Trinitarian vision of God and God's creation to all our students.

He leads the Academic Team, who administer our degree programmes on behalf of our validating universities, the University of Durham and the University of Cambridge. Rob also contributes to the life and smooth running of the college by serving as a member of Ridley's Leadership Team.

As Tutor in Christian Doctrine Rob has the joy and privilege of teaching theology to our students. He loves spending time exploring important Christian doctrines with people from different backgrounds who have responded to God’s call on their lives and who are preparing for many years of ministry in churches, schools and local communities.

Thankfully, at Ridley Hall the opportunities to do theology together extend well beyond the classroom and Rob can frequently be found discussing the trinity, or mission, or the Holy Spirit over lunch, in the common room and even – his particular favourite – in the local pub.

“My years as an ordinand at Ridley Hall were truly life-changing – the best possible preparation for the ministry God has called me to. Looking back, I realise I wasn’t just taught here, I was formed: formed by wise and prayerful staff, through deep friendships with my peers, in the challenges of living in community, formed by sustaining disciplines of prayer and worship and through experiences of real ministry in new settings. Training at Ridley Hall is not always easy – but if God calls you here it can be transformative.” Rob McDonald

Rob was born in Belfast before emigrating to New Zealand with his family a few years later, a move that profoundly influenced his character, added to his vocabulary, and irrevocably altered his loyalty to national sports teams. He studied English Literature at the University of Otago before working for AgResearch, New Zealand’s largest publicly funded scientific institute.

Returning to the United Kingdom in 1999, Rob worked in financial services in London before spending two years on the staff at Holy Trinity Brompton. While at HTB, Rob began to explore a calling to ordained ministry which led him to Ridley Hall to begin his training.

While at Ridley, Rob studied theology at the University of Cambridge, beginning with the Tripos before taking an MPhil and then moving on to doctoral research. Rob completed his PhD on the pneumatology of Karl Barth’s Church Dogmatics under the supervision of David Ford, the Regius Professor of Divinity.

On completing his training at Ridley, Rob was ordained deacon in Lichfield Cathedral and served his curacy in St George of Cappadocia, Shrewsbury. After three years of parish ministry in St George’s he returned to Ridley to take up the post of Tutor in Christian Doctrine.

Rob continues to be involved in ministry, especially preaching and pastoral work at Holy Trinity, Cambridge, where the McDonald family worship. He has accepted invitations to speak at theological colleges and churches in Cambridge and across England, including to the Community of St Anselm at Lambeth Palace and to the members of Leadership College London.

Return to full list of Who's Who
Next: Sally Nash
Send feedback on this page