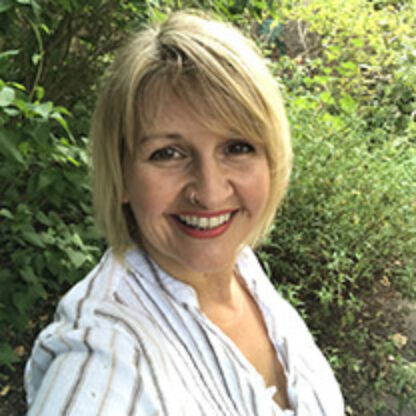 Jo is the Director of Studies at Ridley Online and Ridley Lay Ministry. She is also a children’s and youth work practitioner at St Andrew’s Church in Enfield.

With her many years of educating children’s and youth workers in reflective professional and ministerial practice, Jo is excited to be teaching and sharing from her vast experience.

Jo worked at Ridley Hall between 2005 and 2015, first as Assistant Centre Director at what was formerly known as CYM (Centre for Youth Ministry) and then as Centre Director from 2010.

Jo now works as Director of MABS in Enfield. MABS is a children, youth and families project based at St Andrew’s Church Enfield. The project works with children and young people across the key contexts of church, schools and community. Jo has been instrumental in the development of the project since 2015.

Jo has three grown up children and lives and works in Enfield with her husband Steve. They have a dog called Jess.

Jo forms half of a modern folk band called ‘After The Event’ along with her husband Steve.

Return to full list of Who's Who
Next: Philip Jenson
Send feedback on this page