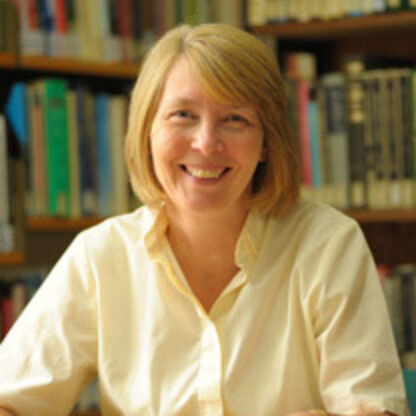 Anne is currently on the Ely Diocesan Healing Advisory Group which offers training days and an annual service of Healing and Wholeness. She is also still active in ministry at the church where she was the Curate.

“Having trained non-residentially, I find myself envious of those privileged to undertake training here at Ridley. It provides an amazing place to grow spiritually, allowing formation to take place in a safe, loving and non-judgemental environment. There is a wonderful sense of community and sharing of journeys – the positive as well as the less positive.” Anne Aldridge

Once called ‘Anne the Evangelist’ because all her friends became Christians after she did, she remains committed to sharing the Gospel in a low-key, non-threatening way which means she is always open to Fresh Expression – she particularly loves Messy Church as it feeds this way of sharing the message.

Anne was born in the RAF hospital at Ely, lived in 21 places by the time she was 21 and finally relocated back to Cambridgeshire (only 13 miles from Ely) in 1989.

Trained originally as a teacher, she became a Christian in her early 20s, was called to ordained ministry in her mid-30s and was ordained in 1999 – in the cathedral only a stone’s throw from where she was born – it felt like coming home!

She completed her Curacy in a Parish near Cambridge, then moved to become Chaplain at Addenbrooke’s Hospital for nearly 9 years, after which Ridley Hall beckoned and she began there in 2011 as a Pastoral Tutor, followed by Chaplain in 2014.

During her time at Addenbrooke’s hospital, Anne served as the President of the College of HealthCare Chaplains for two years.

Anne is married to Rob, they have four children, a daughter-in-law, a son-in-law and three adorable granddaughters. She loves nothing more than a good, noisy, family get–together (and if that is somewhere together in the sun so much the better!)

Anne’s passion is travel as she loves to find out about different cultures (even though she hates flying!). She is also an avid reader and is so pleased to have a kindle because now she doesn't have to carry 10 books every time she travels!

Anne’s aim in life is to write a novel.