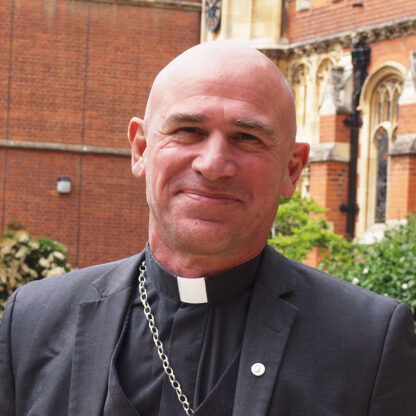 He has been ordained for over thirty years and has spent most of that time in the north and in urban settings. He attributes that largely to the Faith in the City report (1985), published while he was in training for the ordained ministry.

Pete has served in parish ministry on Teesside, on Tyneside and in the West Midlands, as well as on the staff of Lichfield Cathedral as a residentiary canon. Immediately before moving to Sheffield in September 2017, he spent five years as Dean of Liverpool.

In the early 1990s, he studied for a doctorate on the missionary theology of John Calvin. He retains a lively interest in theological education and in formation for ordained ministry, and especially enjoys opportunities to preach and teach the Bible. He is passionate about the Bible as a means of God’s grace.

Pete spent his childhood in India, as the son of missionary parents. This has left him with a love for travel — so he relishes the link which the Diocese of Sheffield has with its companion Dioceses in Kenya and Argentina.

He is married to Cathy, a novelist and senior lecturer in creative writing at Manchester Metropolitan University. He has two adult sons (one in banking in Bristol and one an ordinand in the Diocese of Liverpool), two daughters-in-law and three grand-daughters.

Back to Board of Trustees
Send feedback on this page