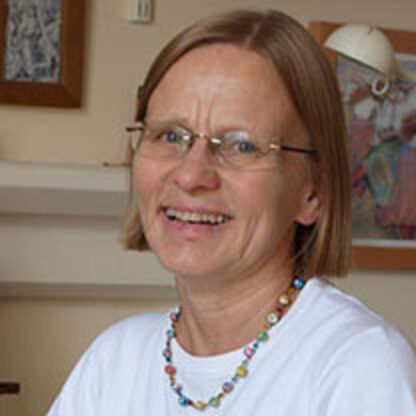 A former Director of Pastoral Studies at Ridley, Eeva is now Enabling Officer on the Teaching Document and Pastoral Advisory Group.

She is also the founder and chair of a charity that supports the Episcopal Church of South Sudan and Sudan in its ambition to establish a Christian foundation university.

Eeva was previously Common Awards Project Manager, and her work in that capacity led to her being one of the first recipients of the Archbishop’s Lanfranc Award for Education and Scholarship.

Born in Finland, Eeva has had a fairly itinerant life growing up in Finland, the USA and Switzerland, and working in Ethiopia and Sudan before eventually making her home in the UK with her husband, Rob. Her career is best described as a multi-coloured patchwork: from being a lecturer and researcher in organic chemistry to relief and development work, it was the experience of leading a community regeneration project that eventually drove her to her first love, namely the study of theology, which she pursued part time over a number of years at Wycliffe Hall and the London School of Theology. Eeva has worked in three other theological colleges – Wycliffe Hall, Trinity College Bristol and Westcott House – as well as for the Ministry Division of the Church of England.

Eeva is married to Rob and has two grown up children who were born in Khartoum and are now in Singapore and London. She loves the outdoors – especially cycling and mountain hiking – as well as music and reading.

Eeva’s interest is in the pedagogy of theological education in its widest sense. She hopes to stimulate the church in exploring creative and transformational approaches to learning for discipleship and ministry. This year she has presented papers at the British and Irish Association of Practical Theology and at the Common Awards Staff Conference.

She has one previous publication related to another area of interest: ‘Challenging Consumerism: Prophetic Paradigms from the New Testament’ in the Evangelical Review of Society and Politics, 2008, Vol 2, No 2, 1-13.

Eeva studied chemistry at Oxford University, where she also did her doctorate on the biosynthesis of penicillin. Much later, she completed a Diploma in Biblical and Theological Studies at Wycliffe Hall and a Masters in Biblical Interpretation at the London School of Theology. She also has completed qualifications in Group Facilitation Methods and Participatory Strategic Planning.