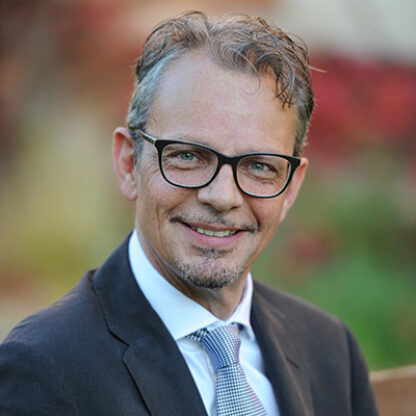 Ian is Chaplain to the community at Ridley Hall (with his co-chaplain and wife Gail Adams). He is passionate about nurturing lives rooted in love for God, for neighbour and for the earth. Attention, stillness and prayer are, he suggests, the essential foundations for such a life.

Ian has a particular interest in the formation of spiritual practice. He is interested in the confluence of art and spirituality. He seeks to bring a creative spirit to all his work at Ridley Hall and creates opportunities for the making and sharing of art in the college.

Ian is a poet, writer, photographer and retreat leader. He is Mission Spirituality Adviser to Church Mission Society, and a Fresh Expressions Associate. He is the creator of the daily Morning Bell on social media, and partner in the Beloved Life project.

He has a particular interest in finding words and images that may enable Jesus to be encountered in a demanding world. A favourite metaphor for Ian comes from jazz, an art form which continues to evolve through the playing of visionary musicians who are both deeply in love with the tradition, and always innovating to allow the music to unfold and expand.

Ian trained at Ridley Hall in the 1990s and was a curate and team vicar in the Diocese of Oxford. In 2004 he co-founded and led the experimental Anglican community mayBe. He was a tutor and chaplain at CYM Oxford 2007–2009 and subsequently taught at CYM Bristol and Cambridge.

From 2009 to 2015 Ian was Missional Community Developer at CMS, then becoming their Mission Spirituality Adviser. From 2011 to 2013 he co-taught the Fresh Expressions Mission Shaped Ministry course in Devon, and regularly teaches on mission and spirituality for churches and dioceses.

In 2017 and 2018 Ian was a pastoral tutor at Ridley Hall, and taught Pioneer Learning and PC3 Context-based Training at Ridley and in the Federation. Since the publication of Unfurling, Ian has been performing his 'poems of life, love and faith' in churches, cathedrals, cafes, pubs and festivals.

Return to full list of Who's Who
Next: Lucy Anstey
Send feedback on this page