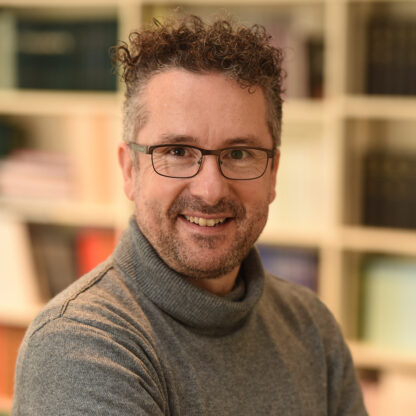 As a member of Ridley's leadership team and working closely with the Principal and Trustees, Robin is responsible for leading on areas of innovation that utilise technology to enhance Ridley's offer in line with its strategic priorities.

Initial projects include the development of Ridley Online to improve access onto existing courses and an innovative, autonomous, fully online offer for sports ministers as part of a national initiative to promote evangelism and discipleship through sport and well-being, the Ridley Award in Sports Ministry and Mission.

Following a career in administration and various volunteer roles in his local church, Robin trained as a youth worker at Ridley Hall in 1998, before undertaking various roles working with substance misusers in a maximum security prison and with marginalised young people in a local Christian faith charity.

Robin joined Ridley Hall in 2007 as a tutor on the then practical theology, youth and community degree. Since then Robin has held various roles as Assistant Director, Director and Dean of Lay Ministry. As Dean of Lay Ministry Robin established RLM (Ridley Lay Ministry) in response to the changing training needs of the church in line with Ridley's vision to be a beacon of excellence in ministerial theological training.

Robin completed a youth ministry degree at Ridley as a mature student, before completing a PGDip in Oral Life History, an MA in Philosophy and Religion, and further postgraduate research in philosophical hermeneutics and technology enhanced learning.

His research in hermeneutics informs Robin's interest in the discipleship of young people. He is a firm believer that while the Church has become better at communicating the gospel, its approach to discipleship is less well developed. Robin's prayer and vision is for Ridley to be a place where all those called to ministerial roles within the Church can be equipped in both mission and discipleship: to see God's kingdom come, God's will be done, on earth as it is in Heaven.

Robin is married to Sam and has several nieces and nephews. He has supported the setting up of a number of small charities within the ministry and social care sector and is currently chair of trustees for TheMovement, an innovative project that provides women facing multiple disadvantage access to trauma informed exercise.

In his spare time, he enjoys most things fitness (particularly callisthenics). Robin completed his first 5km (obstacle) race in 2013. Since then he has completed a number of half, full and ultra marathons including to the summit of Mount Snowden, along the route of Hadrian's Wall, the 56km version of the UTMB race (Mount Blanc) and is currently preparing for a 1000-mile run along the length of Britain in 2023. All undertaken with his eldest brother and ably supported on route by his wider family.

Return to full list of Who's Who
Next: Jess Beaumont
Send feedback on this page